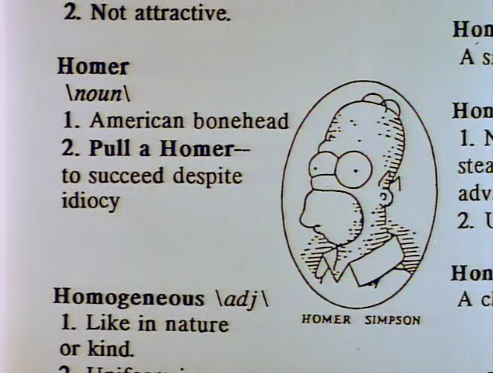 (originally aired October 17, 1990)
As dysfunctional a group as they may be, the Simpson family are well aware of who they are and their place in life, and are just fine as is. A later episode would put it best (featuring Shary Bobbins) with the song “Happy Just the Way We Are.” Homer gleefully sings that he’d rather drink a beer than win father of the year because he knows who he is. He’s a lazy, selfish thick-headed boob, but at least he’s comfortable with it. First season Homer would try to better himself, but the Homer we know and love is feelin’ fine. It’s when one is recognized as someone they’re not when things turn sour. In this show, Homer saves the plant from nuclear disaster by pure dumb luck and is acknowledged a hero by his employer and family, much to his chagrin. I feel a later-day Homer would soak up this misplaced fame with a pompous and arrogant air, but classic Homer knows he’s a fraud, and would love nothing more than to be exposed and go back to being his drunken sloth self.

I feel I’ve just glossed over the entire first half of the show. We open with some wonderful stuff at the plant with Burns and Smithers small talk, discussing their weekend and Burns’ scathing critic over modern day raunchiness in film (“Just give the great unwashed a pair of oversized breasts and a happy ending, and they’ll oink for more every time!”) There’s a fair deal of quiet time of them talking, the calm before the atomic storm, and I really could have kept listening to Burns rattle on for the whole show. The would-be Armageddon is filled with great moments, from Burns’ call-in damage control to Kent Brockman, the flurry of rats fleeing the plant and Marge’s plea to God that in exchange for sparing the town, she’ll be sure to donate quality canned goods to food drives from now on. But Homer saves the day in spite of himself, and wins a bounty of riches, or more accurately, a plaque, a ham, Burns’ strained thumbs up and a congratulatory call from Magic Johnson. This initially feels like the kind of brief irrelevant cameo that we’d see in later years, but it’s not at all, because it’s funny, and works into the story, as he builds up Homer’s guilt. When Homer poses Johnson a hypothetical about people who succeed by accident, Magic replies, “Don’t worry. Sooner or later, people like that are exposed as the frauds they are.” And he makes a great reappearance at the end. Not a crucial role, but a substantial one nonetheless.

Apart from all this is the nice B-story; now Bart’s status quo is shattered as Milhouse informs him that his mom won’t let him play with him anymore, thinking that he’s a bad influence. Of course Mrs. VanHouten’s claims are completely justified, but you feel bad for them anyway. Bart has always been quite bossy and abusive to Milhouse, who takes any and all abuse without question, but all the two really have are each other, fantastically shown by showing a pathetic despondent Milhouse operating a one-man see saw. Their relationship seems one-sided, but they do need each other. Marge acknowledges this and gets into Mrs. VanHouten’s good graces to dissolve the conflict. It’s a real true-to-life plot that gives us breaks from the averted nuclear holocaust A-story, and has a sweet ending with Bart thanking his mother for helping him. Which is of course topped off with him unpacking a BB gun, cocking it ominously, and running off to reunite with his best chum.

Homer is exposed in the end of course; he is invited to the power plant in Shelbyville by its owner Aristotle Amatopolis (another great Jon Lovitz voice) to give a motivational speech which is interrupted by a meltdown warning of its own, one that Homer averts once more with his tried-and-true eeney-meeney-miney-moe method. Throughout the show is a runner showing a scroll through the dictionary, finding pictures of Homer by certain words, such as “stupid” and “fraud.” We close with a new terminology being added to the English language, “pulling a Homer,” or to succeed despite idiocy. I’m surprised it’s not really used that often, it works perfectly. Well, at least we got “D’oh” in the dictionary. Anyway, awesome show.

Tidbits and Quotes
– Few shows back it was Reader’s Digest, this time the show targets USA Today, another publication filled with easy-to-digest factoids and quips. Homer again defends his reading choices: “This is the only paper in America that’s not afraid to tell the truth, that everything is just fine!”
– Bart’s birthday card is fantastic; it’s a Krusty product for children, but for no reason other than the clown’s rampant libido, features a very well-endowed woman in a bikini.
– The build-up to Bart slowly realizing that Milhouse had a birthday party he wasn’t invited to is so great, from Martin’s not-so-disguised awe-struck praise (“Jelly bean basket, personalized noisemakers. But the little touches are what made it enduring!”) to Milhouse’s ingenius ability to change the subject (“Hey! Look at that dog! Isn’t that something!”) which works (“Wow, brown!”)
– Great swipe at Gerald Ford with Smithers informing Burns that Homer was hired under “Project Bootstrap.”
– Burns on with Kent Brockman is wonderful right off the bat with the ridiculous file photo of him with a toupee, to his referral to the meltdown as an unrequested fission surplus. Also great is Kent’s apology when the crisis is averted: “This reporter promises to be more trusting and less vigilant in the future.”
– I love the risque bit after the crisis of the aftermath of an end-of-the-world hook-up. “Will I ever see you again?” “Sure, baby. Next meltdown.”
– Bart, still depressed about Milhouse, can’t bring himself to laugh at Itchy & Scratchy. Lisa asks, “Too subtle?”
– I do love when Milhouse calls Bart to tell him he can come over, Bart immediately asks, “Did your mom die?” Milhouse answers, “I don’t think so.”

This entry was posted in Season 03, The Simpsons. Bookmark the permalink.

Leave a Reply to Kaiju no Kami Cancel reply