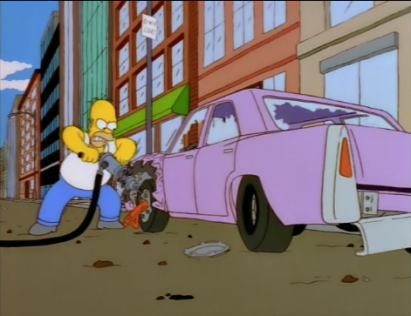 (originally aired September 24, 1997)
We still have some season 8 holdovers, but right away we have an show we’d see plenty more of in the future: travel episodes. We’ve certainly seen the family travel in the past, but many times they were tied to a larger story, like “Mr. Lisa Goes to Washington” or “Bart vs. Australia.” The Simpsons trotting the globe would become more frequent, almost once a season at some points, of isolated set pieces showing how wacky Brazil/Africa/England/whatever is. But enough grimness, this one is actually pretty good, as the Simpsons travel to the Big Apple. The lead-in is pretty fantastic; due to the police breathing down his neck, Moe is forced to instate a designated driver for the night, which ends up being Barney. Turns out it’s the worst possible night, as Moe’s recieves a visit from the immortal Duffman, party hardy company spokesman. I was dying the first time I watched this; Hank Azaria is hysterical as Duffman, such a loud, gregarious character who loves to party down with his favorite distilled alcoholic beverage. With his “Oh Yeah” theme music and cheerleader sidekicks, he’s the ultimate macho mascot for a beer company. Such a booze-fueled fun-packed night drives a sober Barney mad, who drives his buddies home with Homer’s car and isn’t seen again for two months. Homer eventually discovers his car is impounded in New York City, so the family makes a trip there to retrieve it.

The running bit through the episode is Homer’s fear and hatred of the city due to his one bad experience there as a youth, which we see in a glorious aged film flashback. Every bad thing that could possibly happen to young Homer does, scored and timed like a Chaplin silent film. It’s not exactly clear if he’s exaggerating any of the happenings or not, but I don’t believe so; stranger things have happened in the Simpsons universe. Begrudgingly returning to the city, Homer warns his family about the dangers, becoming increasingly more irate as the show goes on. Some may think this is pushing Homer a bit too outlandish and overboard, but I don’t think so. It’s like when one off incident in a place you’ve been turns you off to that place for good, except in this case it’s put through the ignorant Homer filter. To him New York is a town of insane people, and he’s got to get out of there before it taints himself and his family. I personally love how insane it gets in the end; I laugh so hard at the boot scraping off all the metal around the fender, and his personal satisfaction of jackhammering said boot once he’s got it off, at the cost of the near destruction of his entire car.

While Homer is having a miserable time, the rest of the family sees the sights of the city. It’s more what we’ve come to expect of these travel shows; with new material to mine, the writers have a field day, with plenty of great jokes: Marge marveling at lame “landmarks” like Fourth Avenue and Governor’s Island, crazy bums on the subway, Bart warding immigrants away from Ellis Island (“Country’s full!” “Alright, you heard the lady,”) and skinned rabbits in Chinatown. The highlight of course is when they take in a musical, “Kickin’ It: A Musical Journey Through the Betty Ford Center,” a showstopping production on how money and fame gives you legal wiggle room (“I should put you away where you can’t kill or maim us/but this is LA, and you’re rich and famous!”) It’s such a well written number; I’ve seen a fair share of shows on Broadway, and this definitely sounds like it was pulled right out of one. This episode is a nice love letter to New York; with its good and bad representations, it does capture the aura of the city, in an exaggerated Simpsons fashion. It’s a real enjoyable watch, and definitely slides into the “good travel episode” category.

Tidbits and Quotes
– Like Barney walking out of Moe’s backroom with a robe brushing his teeth. In later seasons it’s revealed that he lives upstairs, on the second floor that the bar clearly doesn’t have.
– Dan Castellaneta does a great job as Barney here, going unhinged as his sober night goes on. I especially love when he hears the faint sounds of “Oh Yeah” in the background, he knows what’s in store… (“Oh no… not tonight… not tonight!!“) I also like when the drunk masses are chanting for him to chub his prize beer, he insists he’s the designated driver in a close-up shot of his crazed, sweaty eyes. Later, he expresses his displeasure to his inebriated friends spouting nonsense in the car (“Oh, that’s just drunk talk! Sweet, beautiful drunk talk…”)
– Homer’s homemade car is kind of silly, but I love his devotion to the idea (“Marge, you can stand there finding faults or you can knit me some seat belts.”)
– Lisa reads the note regarding Homer’s impounded car in the city (“If you do not remedy this malparkage within 72 hours, your car will be thrown into the East River at your expense.”)
– Homer’s flashback is really funny as I mentioned earlier: highlights include the titles of the porno theater (“The Godfather’s Parts, II”) and the marquee ticker Homer reads (“Crime up 8,000,000 Percent”) before he’s pickpocketed and a bird steals his hot dog.
– The Internet picked up the unfortunate image on the magazine Lisa holds up, New York: $9, with the Twin Towers right next to it acting as “11.” As if this episode needed more unfortunate allusions. I guess I should touch on this point: given the show is centered around Homer waiting at World Trade Center Plaza, this episode was pulled from syndication for a few years following 9/11. It returned mostly intact; I think they removed the bit with the two guys in the tower yelling back and forth, and the unfortunate line, “They stick all the jerks in Tower 1.”
– Second appearance of Very Tall Man! Don’t care for the joke, but great to see him back.
– Love the phone call to the parking violations bureau, with the alternating voices between cheery and gruff (“You will be assessed the full fine, plus a small/large lateness fee.”)
– Ah, the classic Klauh Kalesh vendor. Highly quoted in my school days (“Mountain Dew or crab juice.” “Ewwwwww… I’ll take the crab juice.”) Great performance by Hank Azaria too.
– Don’t think Lisa would be so naive to think the rabbits in the window wouldn’t be dead, but I like Marge’s sorry response (“They’re just sleeping, upside down… and inside out…”) Also great is Bart’s hijinks caused at a Chinese vendors (“Chinese fire drill! Serious this time!”)
– Now, that the Twin Towers would only have one working bathroom each on the top floor is really dumb. And what bathroom has a giant window by the urinal where you can look outside? But whatever, I still love the frantic sequence as the ending of our second act, as of course Homer just missed the guy and lets out a “D’oh!” that echoes through the entire city.
– I really do love how furious Homer gets as the third act goes on; a highlight is when he turns the radio on, “Everything is Beautiful” plays, and in a rage, he kicks it in, busting it.
– “Kickin’ It” is fantastic, as is the family’s commentary (“When I grow up, I want to be in the Betty Ford Center.” “You better start saving now. It’s very expensive.” “Shhh, they’re strapping down Liza Minelli.”)
– Homer goes pretty nuts at the end, trying to cut off the horse and carriage and getting whipped in the eye. It’s really bordering on crazy insane Homer of later years, but it’s all built to this point and still makes me laugh so I don’t mind. After the day he’s had, it’s understandable that he may not be in his best sorts. Then of course, the end where a twitching Homer drives across the bridge out of town behind a garbage truck, as dirty wrappers and bags of biohazard waste hit him through his smashed windshield (“What a magical city. Can we come back next year, Dad?” “We’ll see, honey… we’ll see…”)

This entry was posted in Season 09, The Simpsons. Bookmark the permalink.