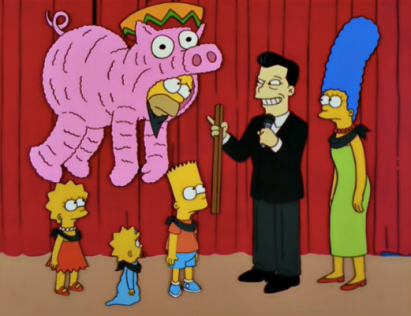 (originally aired May 16, 1999)
This is one of the only latter-day episodes that I have particular fond memories for. I remember loving this one when I was younger, thinking it was the best travel episode, and even ranking amongst the best in the series. I don’t know why, but I just loved the Japan show. And while some parts of it are kinda dumb and slapdash, I have most of the same sentiments now. “Bart vs. Australia” still firmly holds the ‘best travel show’ mantle, but this is still a really entertaining show, excelling in its first and third acts particularly. We start at the newly opened Internet cafe, where Homer is cyber-robbed by Snake, depleting their vacation funds. On the advice of Flanders, the family attends a seminar by mega savings expert Chuck Garabedian, who teaches the value of squeezing every penny. He’s a pretty great one-off character, exhibiting this manic, affirmative persona that is only slightly questionable. I love how proud he is of wearing a dead man’s suit on his urine-soaked yacht with transgender women, he’s truly living the American dream.

Through living the Garabedian lifestyle, the family gets cheap plane tickets, but only if they don’t care what the destination is. So, it’s off to Japan. The second act is basically cramming as many Japanese-y segments together as possible. Sumo wrestling, square watermelons, hyper-advanced toilets… They’re all entertaining as isolated bits, but it’s not as engaging as it would be if there were some kind of through-line plot here. But being a bit aimless is a minor problem in the grand scheme of issues we’ve seen this season, especially since the show manages to stay funny throughout. Although there is the Jerkass bit where Homer throws the Emperor into a bin of used sumo thongs, and then is not reprimanded in the least. I guess the joke is that they’re more polite and that’s why he and Bart are treated so well in jail. But I have a different theory… although I would have loved it if they did, I get why they didn’t make any Mr. Sparkle references in this episode, since it would make no sense if people didn’t get the callback. But why do you think Homer got the five-star treatment? Think about it.

So the family ends up losing their last bill of yen and are out of luck on how they’re going to get home. But salvation comes in the form of Japanese game show “Happy Smile Super Challenge Family Wish Show,” hosted by Wink, voiced by George Takei. Part of me can’t tell whether I should be praising the writing, or Takei’s beyond excellent delivery for each of his lines; I guess I might as well praise both. But this section of show is pretty genius; if you’ve seen any one bit of Japanese game shows, this is exactly what they’re like. And actually, this one actually might be even more tame than the genuine article. Even when things get a bit too silly, like Homer getting electrocuted repeatedly, they manage to save it. Or rather, Takei manages to save it (“He seems okay, but he is being burned internally.”) Did I mention I love George Takei? But anyway, we end with yet another fucking action suspense sequence like every damn episode this season, but at least this time there’s a payoff, where it was all manufactured by the show and it was all a big goof. So in the end, I wouldn’t say I have the same unconditional love for this episode as when I was younger, but hands down it’s one of the best ones of this season. Then again that’s not much of a contest. But whatever.

Tidbits and Quotes
– Why would Wired magazine print about an Internet cafe opening in some small town? Minor gripe, I guess.
– It’s really really stupid, but I do like how Snake seemingly robs Homer via floppy disk, as well as his exit (“Yoink-dot-adios-backslash-losers!”)
– Don’t really care for Homer burglarizing Flanders. It’s sort of like taking his constant “borrowing” of his things to the next degree, where it’s no longer slightly amusing and realistic, and now it’s just flagrantly illegal and dumb. Though I do like how Homer just starts making himself a sandwich as Flanders is talking to him.
– Burns seems to be popping up a lot of places where he doesn’t belong; why would he be at the Mega Savings Seminar? But we do get a great bit from Uncle Pennybags (“These yokels are pure Baltic Avenue. …uh-oh! I’m late for the Short Line Railroad!”)
– The Simpsons go to shop at the 33-cent store, with a lot of great background products (Onions?, Cool Ranch Soda, “That 70’s Show” mugs.) There’s also Skittlebrau, the beer that Homer seemingly made up a season or so again. Marge also finds her dress (“Thirty three cents? I paid almost double that!”) and is put off by an odd blue variant.
– Great exchange after Homer smashes the piggy bank (“Homer, you could’ve just unscrewed the bottom.” “A little late for could’ves, Marge.”) I use that line every time someone pulls out a “could’ve.”
– Garabedian appears at random in the Simpsons backyard, which just serves to remind me how later characters will just appears wherever they’re needed for no reason whatsoever. But the payoff to this makes it worth it (“You fat cats didn’t finish your plankton; now it’s mine!”)
– Love the pilot’s announcement upon landing (“Welcome to Japan, folks. The local time is… tomorrow.”)
– Classic bit with Battling Seizure Robots, riffing off of that one Pokemon episode that gave kids epileptic seizures. Never made it here to the States, I guess for good reason.
– I love Americatown. So so much. We’ve homogenized and bastardized every other culture on the plant, so this is the Japanese take on us: the Kool Aid guy marching with George Washington, an astronaut boxing Mohammad Ali, and ET looking up Marilyn Monroe’s skirt. I love the layout too where the tables are all fifty states. Homer bemoans having to sit at “Taxachusetts,” then proceeds to reflect on an anecdote (“You know, I once knew a man from Nantucket.” “And?” “Let’s just say the stories about him are greatly exaggerated.”) He’s also quite amused by the “American” waiter (“Don’t ask me; I don’t know anything! I’m product of American education system. I also build poor-quality cars and inferior-style electronics.” “Oh, they got our number!”)
– I still think it’s a sweet moment when Homer makes Lisa the paper crane out of the yen. And then of course it blows away, and we get Homer saying “D’oh!” in Japanese. I wonder what that actually translates to.
– I love how unhelpful the American ambassador is in helping the family out (“Try getting a job and earning some money. That’s what I did. By the way, ambassador’s taken.”)
– I don’t see Lisa condoning working gutting fish, but I guess it’s not like she had much choice. Maybe one bit of her expressing her disgust would have been nice.
– Great categories on the game show: “Ow, that hurts!,” “Why are you doing this to me!” and “Please let me die!”
– The ending almost works as a stupid subversion of the overdramatic action endings we’ve had as of recent. It’s literally a manufactured ending for the game show, so it’s all playing to that fictional studio audience’s entertainment. Plus it’s pretty funny anyway (“At least we’ll die doing what we love: inhaling molten rock!”) Homer’s shaming speech before they leave is pretty excellent too (“Game shows aren’t about cruelty, they’re about greed and wonderful prizes like poorly-built catamarans, but somewhere along the line you lost your way. For shame.”)
– I guess following my anger toward the Loch Ness Monster two episodes back, I should be just as pissed that apparently Godzilla, Rodin and all the other monsters apparently exist as well. But I’m not, really. It’s just for one stupid joke at the end of a silly episode, not the crutch of the entire third act like Nessie was. I’ll excuse it.

Season 10 Final Thoughts
So what a season, huh? All the problems that started creeping in over the last season and a half are exhibited full force here: thin, ineffective storytelling, plot turns and conceits that make no sense, and flimsy characterization, including more and more Jerkass Homer. The laughs are still present in some capacity, but there were a fair share of episodes that didn’t get more than a few chuckles out of me. Humor can absolve a lot, but sometimes an episode just has a shoddy aura to it that leaves you just terminally displeased, which quite a few this season did to me. It still feels like The Simpsons, but there’s something fundamentally wrong. Subtlety and witty jokes are being replaced with bombastic slapstick and over-the-top action sequences; the show’s getting more ridiculous and less grounded in any sort of reality. It’s almost become just another wacky cartoon, not the sharp, smart animated series we fell in love with to begin with. As of now, I think there’s no greater divide in quality than there is between seasons 9 and 10. If season 9 was the show teetering over the edge of the cliff, season 10 was the fall. How far until we hit the bottom? Is there even a bottom? I guess we’ll have to see. Season 11 away.

The Worst
“When You Dish Upon a Star,” “Homer Simpson in: ‘Kidney Trouble,'” “Viva Ned Flanders,” “Make Room For Lisa,” “Monty Can’t Buy Me Love”