250. A Tale of Two Springfields 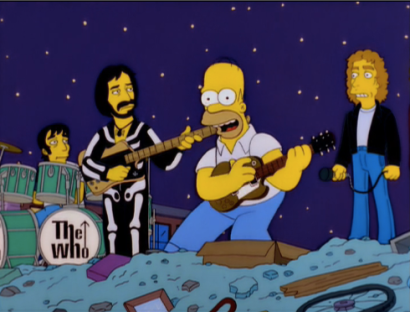 (originally aired November 5, 2000)
Wow, two hundred and fifty episodes. And I got nearly two hundred more to go. Oof. But while I’ve essentially given up hope that the show will return to its former glory in terms of storytelling, I still think I’m gonna get a fair amount of laughs from these remaining seasons. This episode kind of shocked me in that I found myself chuckling at a fair amount of the jokes. The show itself has a laundry list of problems with it, and it’s by no means good, but I actually enjoyed watching it for the most part. It’s… baffling. Homer is dumbfounded when he is informed that the town has been split up into two area codes, and rather than memorize three extra numbers, he raises a stink at a town hall meeting and decrees his side of town with secede and become New Springfield. Homer is made mayor, and it of course isn’t long before his fellow citizens jump ship across city lines, and he must come up with a plan to get his townspeople back.

Homer is an absolute maniac here, having a nervous breakdown upon hearing the tri-tone, coming to city hall strapped with dynamite, and smashing his hand through glass windows in stores to pick up items. But what’s so odd is that I was amused with all this. I think the show crossed the threshold here, in making the content so ridiculous and absurd that it came back around to being funny again. There’s things Homer does here that still pisses me off, like thinking the phone mascot in the film is a real person and chloroforming his wife, but his wacky antics, while nothing akin to classic Homer, still were kind of amusing. I think that despite the plot being kind of dumb and a mess, the episode was helped by a lot of great individual lines and scenes. Olde and New Springfield’s petty rivalries were reminiscent of Springfield and Shelbyville’s feud, and just as asinine. Even special guest stars the Who were funny, and actually were set up in the beginning of the show when Homer lost his chance to get free tickets to see them. They actually bothered to lay groundwork for their celebrity appearance. I’m shocked.

I feel so weird praising this episode so much… It’s by no means good. The plot is pretty flimsy and its resolution even more so. Despite my praise, Homer is still a complete dunce, and there’s no way that anyone would consider him qualified to be a mayor. None of it really makes sense in terms of characters acting like humans, it’s just a bunch of silly stuff that follows a very general plot. It’s not classic Simpsons, but in a weird bizarre way it kind of works. There’s a fair amount of junk in here, namely Homer acting out and yelling and screaming, like when he get set on fire atop the wall and attacked by the badger at the beginning. I’ve always said humor can absolve many sins, and this episode ate through some of them. I’d say the good and the bad are about even here, and I’m just surprised that I ended up so favorable about this episode. Have I gone mad? I guess we’ll see as our season begins…

Tidbits and Quotes
– At the time of the first airing, FOX had registered whatbadgerseat.com. I was curious if it was still active, but it just redirects to the main Simpsons website. It was a clever conceit. They’d later do it again this season for the Mr. X blog.
– The badger rips Homer’s torso apart, revealing his internal organs. I… really have no words. I can’t even complain about the logistics, or why Homer and Lisa are so nonchalant about it, because I don’t believe what I am seeing.
– I like how upset Homer gets about such a minute change (“939!? What the hell is that!? Oh, my life is ruined!”) and how he basically shoos away the badger story in favor of this one (“Go away, we got bigger problems now!”)
– Classic bit with Homer’s written reminder on his hand (Lenny = White, Carl = Black).
– Love the outro line of the first act (“Now who’s stupid!”) …you are, and everyone else in your crazed mob.
– The Olde v. New Springfield bits are great, with Bart tricking the bullies into doing his homework over city lines, and Marge feeling nervous about going to the Kwik-E-Mart in Olde Springfield (“I don’t know why, but I just didn’t feel comfortable until I was back here in New Springfield with my own kind. They were looking at me… with their eyes!”)
– Nice dirty joke from Kent Brockman after the town discovers gold (“Thanks, Mayor Simpson. Because of you, we’re all taking golden showers!”) Production assistants giggle in the background. This makes more sense and is funny, unlike Homer randomly mentioning a glory hole last episode.
– I like the terrible guard who instead of throwing Bart and Homer out, makes good on his sarcastic promise and takes them to the Who. He’s also impervious to being fired (“Oh, yeah, right; I got fired by The Who. Whatever you say, pal.”)
– The Who are actually pretty funny here (“Come on, what happened to the angry, defiant Who of ‘My Generation,’ ‘Won’t Get Fooled Again,’ and ‘Mama’s Got a Squeeze Box’?” “We know our songs, Homer.”) (“Just send the car for us.” “What, something wrong with your legs?” “You’re right. The walk will do us good.”) And of course, the Who Huddle.
– Nice commentary by Krusty and Sideshow Mel waiting for the Who to perform (“I opened for The Who at Woodstock. I came out in a Beatle wig with a ukulele. Hendrix said he almost plotzed! His exact words.” “Oh, I never tire of that story.”) I pull that Mel line out when the situation seems appropriate.
– Homer dancing on the wall like a moron is pretty awful, but it’s saved by John and Roger’s perplexed looks at each other.
– Awful ending where Homer passes the buck of the blame to his wife and then drugs her, and a swarm of badgers enter the city to maul everybody. But at least I got some Who to listen to.

This entry was posted in Season 12, The Simpsons. Bookmark the permalink.