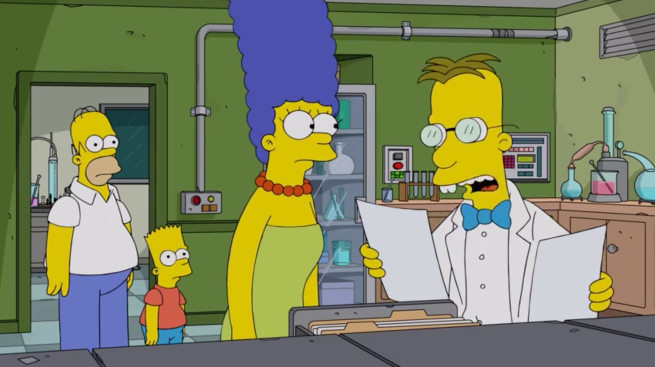 The premise: A town wide exam to determine each Springfielders’ intelligence ranks Bart dead last, but when an incensed Marge to confront test creator Professor Frink, it’s revealed that Homer is in fact the stupidest man in town (WHAT A SHOCK).

The reaction: Springfield gets their IQ (or rather, Frink’s incredibly alternative PVQ) tested as a result of Mr. Burns believing the apocalypse is coming from an old Orson Welles introduction to a movie, and he plans to build a doomsday ark and only wants the best and brightest to travel with him. Got it? Remember the Burns who, upon impending nuclear meltdown, wouldn’t let Smithers use the sole two-seated escape pod (“I like to put my feet up.”) I don’t know how much Burns would really care about saving humanity, but if he were to extend some empathy for his fellow man in a time of impending crisis… it sure isn’t what’s being done here. This is gullible Burns, followed by mindlessly happy Burns, wantonly smiling as Frink interrupts his meeting with MENSA for a literal song and dance to introduce his super accurate PVQ intelligence assessment system. Anyway, the PVQ results are announced on the local news, with everyone’s name and score scrolling at lightning speed. Marge is easily able to pause and find each family member one after another, which I’m not sure if that was supposed to be a joke or not. Disheartened to find Bart literally scored a 1, Marge confronts Frink about it, who then discovers that due to his sloppy handwriting, Homer is the true ultimate dummy. Act three features Homer being depressed and humiliated about being Springfield’s biggest idiot… this is news? Are we seriously over six hundred episodes in and we’re doing this episode? Springfield is full of absolute morons, some of which are his closest friends, why would he feel ostracized? In the end, Marge reassures Homer and urges him to take steps to improve himself, starting with his penmanship, which I just now realize is referring to the reason his test was misidentified in the first place. I dunno if it’s just me or the show, but sometimes it’s hard to connect the dots like that because these episodes seem to not care less about the stories they’re telling. And it’s certainly even harder to care when your episode is about Homer feeling sad about being dumb.

Three items of note:
– Lisa is smugly satisfied with her high PVQ score, but is shocked to find Ralph scored a point higher than her. Because she’s a crazy person, she takes to following Ralph around and observing him to see his brilliance. This culminates in a hilarious finale of the two ending up high up on a construction site on a steel girder. Man, I hate Zombie Ralph so much, he’s just a brain dead non-sequitur prop. Lisa ultimately confronts Frink about her score, who proceeds to raise her number just for the hell of it. Why did she go through all this nonsense to begin with? Oh, who gives a fuck.
– Looking through his file cabinet to recheck Bart’s score, Professor Frink thumbs past a few other files, one of which is labeled, “Smithers, Waylon, Soon To Be Wanda.” Sigh. In the past, we’ve seen a good handful of “jokes” such as this, where the only thing you’re supposed to laugh at is “they’re changing their gender! Isn’t that crazy?!” Future Lisa finding Martin is now Marcia Prince, the gym teacher Mrs. Pommelhorst leaving to become Mr. Pommelhorst, and so forth. We also have had at least two jokes featuring Smithers taking estrogen pills, despite him expressing no interest whatsoever into becoming a woman. It’s just so baffling that here we are in the year 2018, and for whatever reason the staff still thinks it’s a-OK making gags equating homosexuality to being transgender. They’re not the same thing. At all. I just don’t understand what they’re thinking. If anything. Also, beyond all of that, why the hell would Frink have written that on the label in the first place?
– The episode ends with Homer working diligently on his cursive, and leaving Marge a bunch of sweet poems leading up to the bedroom, with him passed out on the bed amidst a slew of pages with his reading glasses still on. Marge is understandably touched. I feel like that might have been kind of sweet if there had been more of a build-up and meaning behind all this. These characters are such shallow husks of their former selves, worn down by years and years of piss poor characterization and storytelling, that it’s like a shock to the system to me whenever there’s a moment that actually feels emotionally resonant.

One good line/moment: Maurice LaMarche as Orson Welles is always a delight. He has a considerable amount of screen time with a good two minutes of the opening, then appearing again in Burns’ dreams. Clearly the staff loves Maurice doing Orson, and who can blame them? But, I dunno… Orson Welles in 2018? Really? And it’s not like they’re doing anything with him that hasn’t been done many times over on this and other shows. The pinnacle still remains the “green pea-ness” bit from The Critic and that shall never be topped (“Oh, what luck, there’s a French fry stuck in my beard!”) Hell, a decade ago, they had young Orson Welles appear in a Treehouse of Horror segment doing his famous War of the Worlds radio play and the gullible suckers of Springfield believing it. That felt like a unique usage for the character. Here, it’s just like, yeah, it’s nice and all, but why is it here? 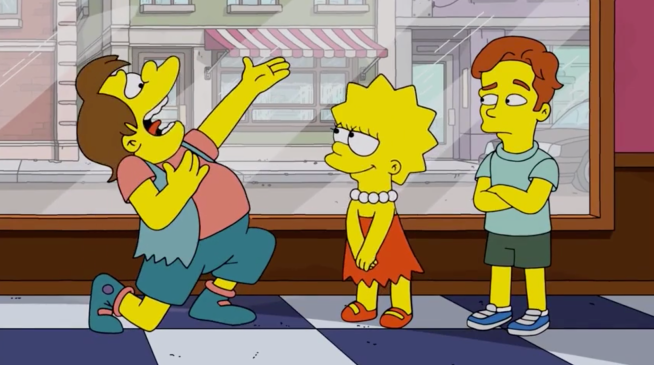 The premise: Lisa falls for gifted pianist Brendan (voiced by Ed Sheeran), leading ex-boyfriend Nelson to compete with him musically. Meanwhile, Bart is interested in chemistry for some reason.

The reaction: La La Land feels like a thing of the past at this point (being a frivolously enjoyable, but ultimately meaningless ode to Hollywood circle jerk probably doesn’t help things), but thanks to the show’s long production schedule, we get yet another movie “parody” a year after its cultural relevance. Of course the show doesn’t get much farther than glorified references, with the new boyfriend slightly resembling Ryan Gosling, and the opening recreating the film’s highway musical number, but nothing in the vein of actually critiquing or making any actual commentary on the source material. It’s a love letter to another love letter. The episode itself is another Lisa-gets-a-boyfriend episode, who is slowly closing in on her brother for greatest number of disposable, personality-less love interests voiced by celebrities who are playing children but still sound like adults. Brendan the child savant musician wins Lisa over immediately thanks to an inner monologue explaining it, per usual (“In a lesser musician, that boy’s attitude would be needy masquerading as arrogance. I’m leaving if he can’t sing.” Then he sings. “Oh God. He’s one small step away from destroying all my logic and reason.” Then his pupils turn into music notes and she swoons. I guess the final step was hallucination?) I’ve said it time and time again, this show is crippled by its reliance on tell, not show. Because this show can’t write believable characters doing things to affect the story or other people, we need to have the characters openly explain what’s happening and what they’re feeling to make our plot progress. Midway through, I don’t know why Lisa likes Brendan other than she told us, and that he’s a musician, I guess. They play together, but we don’t get any sense of them enjoying it or why they like each other. But who cares. Midway through, we see Nelson targeting this kid because he’s jealous and ends up singing his heart out to win over Lisa. Even he can’t explain why he’s doing this, being motivated solely because “Lisa’s Date with Density” exists and it’s a reference to a classic episode we can make. But I know why. They wanted to do a La La Land show, they had to come up with a riff on the title, and someone pitched “Haw-Haw Land,” ergo, Nelson had to be involved in the plot. I guarantee that’s exactly what happened.

Three items of note:
– The B-plot is one of those premises where I feel like I’m zoning out while watching because I honestly didn’t understand what was happening. While being dragged to a STEM conference, Bart is courted by some smart science guy, who shows him that chemistry can lead to explosions and creating multi-colored goo. Or something. Bart then gets an interest in conducting experiments in his treehouse, which later leads to Homer and Marge growing concerned about what the hell this newfound interest is really about. The finale of the episode is at the talent show, where many suspect Bart is going to perform some kind of dangerous prank, but he actually creates some kind of cool light show? And then he causes pink goo to flood the school. Not a lot of screen time is devoted to this, and it’s a B-plot that felt the opposite of tell, not show, where we’re given so little information that I really wasn’t sure what the point of it was. It certainly wasn’t funny, I can tell you that.
– Lisa is torn between Nelson and Brendan, but after a dream sequence of Lisa marrying Nelson at a strip club and her bringing their baby to visit him in prison, she easily picks Brendan. But Brendan’s performance at the talent show is interrupted when Chalmers and Skinner narrate that he actually isn’t in the school district and must go to another school. And so, Brendan gives Lisa a pat on the shoulder and disappears behind the curtain. I know this show is completely hollow and bereft of any kind of emotional resonance, but is this really the best they could do? I mean, I know it isn’t, but this feels like an especially cheap and shoddy resolution, even by their standards.
– The episode ends with another ancient-feeling reference where Marge addresses the audience that the episode was actually meant to be a Moonlight parody, alluding to the Academy Awards snafu last year where Faye Dunaway announced the wrong winner for Best Picture. Does the general audience really remember or care about that? And who’s laughing at this joke? Marge informs Homer they can watch the movie at home, but he wants to watch X-Men Apocalypse instead. Sigh. This bit will hold up well in five years. I feel like in the classic years, even when they directly referenced films that have fallen into obscurity, they were still contextualized enough that the bits were funny beyond your knowledge of the source material. Like in “Selma’s Choice,” Marge waxing nostalgic of the carefree days her and her sisters spent swimming at the lake by her aunt Gladys, then recalling that was actually from Prince of Tides. I don’t know a thing about that movie, but the joke still works because it’s about how the emotional resonance of mass media can affect our memories and cause fiction and reality to blur. It’s still an effective joke twenty-five years later, whereas in this case, they just needed Homer to say a recent brainless action movie, so they picked X-Men.

One good line/moment: Nothing this week. This one was a real fuckin’ bore.