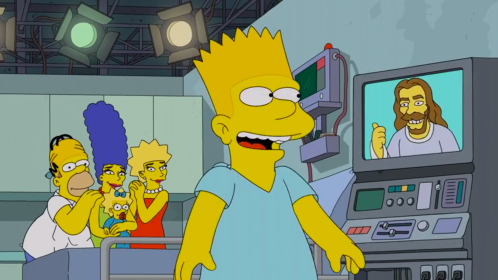 The premise: Bart ends up in the hospital after being dared to jump off the Springfield dam. To keep from getting in trouble, he asserts he went to Heaven and met Jesus while in his coma, a story which catches the attention of Christian filmmakers looking to make Bart’s story into a movie.

The reaction: I’ve scrolled past a handful of articles on Twitter of entertainment sites commemorating the 30th season of the show, almost customary to acknowledge the milestone of the increasingly irrelevant series, as they previously had done with their Gunsmoke-breaking record last season. But my heart goes out to these writers, as well as anyone who has to actually cover these new episodes, because really, what the fuck is left to be said about this show at this point? I guess I should know more than anyone by now. I’ve seen the show attempt to buck convention, to try new things from time to time, but with very, very rare, fleeting exceptions, this show has been the same variety of ramshackle for the last decade plus, and I don’t really see them doing any major repairs any time soon. This premiere takes aim at exploitative Christian cinema when Bart BS’s a sob story about meeting our Lord whilst in a coma, catching the attention of money-hungry pious producers. The premise is cribbed from the novel-later-film Heaven is for Real (and its less fondly regarded cousin The Boy Who Came Back From Heaven), stories meant to inflame one’s faith with tales of present day, “real life” miracles. I’ve never seen one of these Christian films, but from what I’ve read of them, they seems like very ripe breeding ground for satire, but, per usual with this show, they seem as content as ever to keep things in first gear, with softball critiques like “They keep all the money for themselves and not the church!” There’s a personal component here of Lisa acting as Bart’s guilty conscience as his lie grows bigger and bigger, and Homer’s guilt for encouraging him to take the dare and encourage his initial lie in the first place, but it’s all very surface level and nothing we haven’t seen before (Homer’s insistence Bart follow schoolyard protocol felt reminiscent of “Bart the General” or “The Telltale Head,” except if you replaced human characters with cardboard cutouts.) So, yeah, nothing really flagrantly awful, but just a very bland episode with a good amount of missed potential. Again, there’s really only so much I can say that hasn’t already been exhaustively covered in the other six hundred and thirty nine reviews… but as long as this show keeps plugging away, I might as well keep on tailing this shambling, barely-functioning jalopy, inhaling and critiquing its noxious exhaust until I die. Onward, season 30!

Three items of note:
– The bullies dare Bart to jump off the dam, which he does, plummeting hundreds of feet before smacking head first into the outcropped ledge below him. Now, the title may claim otherwise, but Bart should be dead… right? I know almost all realism has been completely thrown out the window at this point, but this feels like way too much. If falling from his treehouse in Bart of Darkness landed him with a broken leg, this stunt should have cracked his skull open. Last season finale he got struck by lightning and was in a coma for days, but here, he appears to be in no pain and awakens with no problem at all.
– Marge grills Bart for proof he’s not making up his come to Jesus story, so he tells her he also spoke to her father, Grandpa Bouvier. Overcome with emotion, Marge believes him, excusing herself. She then proceeds to remain absent for most of the rest of the episode until Bart reveals he lied, save one scene where she tells Lisa she coasts through life on blind faith and getting wine drunk. It’s a stretch to me, but if Marge really believes her son actually spoke to her dead father, don’t you think she would want to know more? That it would have really affected her? That she would have told her sisters? Even after 30 years, we barely know anything about Mr. Bouvier and his relationship with his daughters; an episode really examining Marge’s thoughts on her dad and learning more about him could be incredibly interesting. But that sounds pretty tough to write, so I’m certain they’ll never do it. But putting the Simpsons on another reality show? That sounds like a draft someone could bang out on their lunch break.
– I honestly and truly don’t go into these episodes trying to nitpick (do you really think I care enough to pay that great attention at this point?), but each episode usually has some “wrong” stuff that leaps out at me. Wonder Woman‘s Gal Gadot auditions for the role of Lisa, and they don’t even make a joke about how this full grown woman is auditioning for the part of an eight-year-old. Was it cut for time? Bart is played by what looks like a little person (he comes up to Gadot’s midsection), voiced by the 5’11” Jonathan Groff, so I don’t know what that’s about. Also, that framegrab above is from the finished movie, where we can clearly see the ceiling and stage lights of the sound stage. But it’s not a joke; we previously saw the exposed set in a previous scene during filming, so they probably just directed this scene the same way and either didn’t realize or just forgot. Again, these seem like nitpicks, but moments like these really stand out to me. Back in the 90s during the advent of VCRs, this show used to reward you for paying attention, where every line of dialogue, background sign, every element of the show was there to add to your viewing experience, not detract like in examples like these. I have no doubt the entire staff of this show works very hard, but somehow a lack of care seems to come out in the end that really baffles me.

One good line/moment: Two things I actually genuinely liked: Emily Deschanel auditioning for Marge doing her Julie Kavner impression (ruined slightly by the tortured running gag of Homer thinking she’s actually his wife), and Jesus beating up Bart in his dream, a well done use of shock humor.

Bonus (unrelated) thoughts:
Originally I thought I’d write a paragraph or two of my thoughts on Matt Groening’s new Netflix show Disenchantment, but five or six weeks since its release feels like an eternity to me now, and I don’t know how much care I have left to give about it. Sadly, the ten episode first season failed to make much of an impression on me. The show felt very much like season 1 Futurama, setting up this new fantasy world and establishing the core characters and their relations with each other, but unlike Futurama, doing it incredibly half-heartedly. The world of the series feels very static and uninteresting; from the trailer, I thought after escaping her arranged marriage, Princess Bean and her two new weird friends would travel the lands and she would try to find a sense of purpose, but instead, they just kind of bum about the kingdom doing fuck all, until the last three episodes decides it wants to be serialized, but by that point, the show hadn’t made me give much of a shit about its characters, so what’s the point? It’s not an awful show, I got sporadic laughs from it, most coming from Elfo, who was my favorite character, thanks to a great performance by Nat Faxon. But his refreshing characterization of his lovable naive openness to this strange, new world (“I like war, but I wouldn’t say I love it”) quickly takes a backseat to his unrequited crush on Bean, a boring and overplayed trope. There’s not enough about the show I liked to really recommend it, but I think it’s possible to be salvaged in its second season… but I wouldn’t hold my breath over it.

Posted in Season 30, The Simpsons