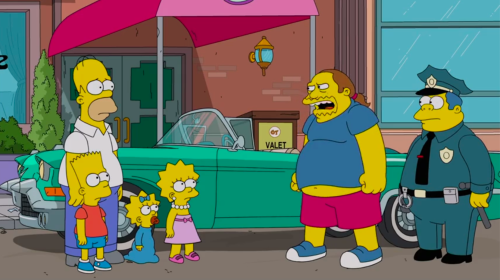 The reaction: Just as last episode cracked open a door about one side character’s inner psyche only to have it promptly slammed shut, here we get a pinhole view into Comic Book Guy’s past and his inner self, but it’s completely ignored in favor of sole focus on Homer and other unrelated shenanigans. Given the wrong keys at the valet by accident, Homer takes the kids on a lengthy joyride in a vintage Cadillac. Upon returning, its owner turns out to be Comic Book Guy, who is livid at it being returned with a scratch and his rare Radioactive Man #1 comic in the backseat completely destroyed (what it was doing there is unexplained). He mentions the car was his father’s and has sentimental value because of it, but that’s about as far as the explanation goes. As much as the Simpsons plead with him to show mercy and drop his grand theft auto charge, CBG stands (er, sits) firm, claiming this is a matter of defending his dignity and not to be pushed around, as he feels undermined in life already as an overweight comic book geek who gets no respect from his customers (as we see with a preposterously cocky Milhouse who comes in to boss him around). So, yeah, CBG is a sad sack loser who I guess we’re supposed to feel bad for… maybe? But, he also has a wife who loves him, who appears silently in two scenes. Remember her? Just like Selma’s adopted daughter, she’s a character who basically amounts to set dressing. Marge doesn’t bother meeting with Kumiko to try to get her to talk reason to her husband, she appears to have no opinion about any of this. When we see CBG lamenting in his back office about the sad, sequestered life that he leads, where does his wife fit into all this? In the end, Homer is saved by his Welcome Back, Kotter keychain, which, after explaining it has sentimental value as his father gave it to him, it get promptly smashed to bits by CBG, a seemingly satisfactory eye-for-an-eye of destroyed cherished items. Again, this would have been the perfect moment for CBG to say something, anything about what value his father’s car holds for him. Maybe he and Homer both had terrible fathers, but these items represent their childhood memories of the good times they had with their dear old dads. But no, we quickly wrap things up as quickly and illogically as possible (“Are you saying I’m off the hook?” “Yes! In fact, you may be surprised, but you are now my best friend.” “So I’m not going to prison?” “No. You are going to Comic-Con with me!”) Then we see them at Comic-Con. Where’s Kumiko? She’s a manga artist, right? Wouldn’t she want to go to Comic-Con with her husband? Oh, never mind. Season 12’s “Worst Episode Ever” wasn’t a fantastic episode, but it at least tried to flesh out CBG a bit, and examine how his pettiness and seething sarcastic nature has alienated him from the world. Here, we have an episode seemingly about CBG, but barely even tries to look into anything new about him.

Three items of note:
– Lisa proposes the idea of making a sentencing mitigation video, showing off an example director Guillermo del Toro did to help Mr. Burns get off. The staff loves del Toro, who previously directed the opening to a Treehouse of Horror, who appears on screen in his famous House of Horrors, and his video is filled with references to his movies. But, as always, these are not jokes, they are references. I absolutely love del Toro, but there’s not even an attempt made to make any kind of joke about him or his work, it’s all just a fawning wank-job (Lisa coos, “Once again, Mr. del Toro stripped away the darkness and found beauty at its core!”) I guess Marge referring to The Shape of Water as the “fish-snuggling movie” counts as a joke? Not really though. And then of course we see a dream clip of Homer as the fish monster. I’m sure del Toro loved being on the show, and I’m happy for him, but he’s another in an endless conga line of completely wasted guest stars. Can you think of any celebrity guest from the classic years who was on the show just to be praised and lauded? They made American hero Buzz Aldrin say “Second comes right after first!” for God’s sake.
– Going to the various townspeople to film them about how wonderful Homer is reminds me of the long-running joke across many seasons how Homer is this widely hated pariah of the town (even all the way up to the 500th episode where they exiled the Simpsons because they hated them all so much). How did they think this project was going to go down? We see them talking to Moe, the closest friend Homer really has (next to Barney, I guess, or Lenny and Carl), Smithers, Skinner (?), and then we alway see Patty and Selma in the cut-up video. Patty and Selma. Even as wishful thinking as Marge is, she surely would know better than to ask her sisters to say nice things about Homer. It’s stuff like this that makes these shows unbelievable, when the characters do things that makes no sense for them to do.
– The final mitigation video features Homer being kind of a good dad, and manipulating Maggie into saying, “My daddy,” to curry favor with Judge Snyder. Except, we saw earlier when Homer tried to relate to him as a father, he was clearly very embittered by it (“I’m a judge, but I’m also a father… a father whose ex-wife only sees their kids at summers and Christmas. I don’t need you to rub it in!”) So why would the Simpsons think this video, which is even more cloying as a caring, loving family, would make Snyder feel any differently? Again, unbelievable.

One good line/moment: CBG wearing a Radioactive Man tie to court was a cute touch, and furthered his connection to himself and the destroyed comic. If his speech was actually emotionally revealing, and not just repeating the same surface level details we already knew, it would have actually meant something.

This entry was posted in Season 30, The Simpsons. Bookmark the permalink.