20. Two Dozen and One Greyhounds

And that does it for me for 2020!  The Revisited series will return in 2021 with season 7, as well as the triumphant return of season 32! Oh boy! Although keep your eyes peeled, there might be a special Christmas surprise coming just in time for the holidays… 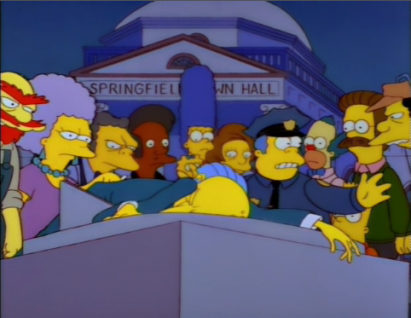 (originally aired May 21, 1995)
Man I wish I hadn’t been a young’n when the “Who Shot Mr. Burns?” saga was underway. From what I read of it, it was quite the event, with widespread debate and discussion amongst fans regarding the mystery. The only two-part episode in the show’s history, it rides the line of being a gimmick episode, and being a parody of one. There was the 1-800-COLLECT contest and other FOX promotion around it, but the episodes themselves were filled with enough winking nods that they didn’t feel disingenuous (the conceit itself is of course a parody of the “Who Shot J.R.?” mystery from Dallas). But audience reaction to this event episode only came from how solid and well crafted it was. Such great care was put into setting up clues, giving every character a motive, and ending on a note where there’s no real definite suspect. Yet even with all the information to be fed and groundwork to be set, it all feels cohesive, and more importantly, it still feels like The Simpsons, with plenty of funny bits that work in tandem with the dramatic parts. I don’t know if I can call either of these favorite episodes, but they are definitely landmark shows of the series, put together with great attention to detail, and absolute treats to watch unfold.

Oil is struck at Springfield Elementary, much to the thrill of Principal Skinner, and to much chagrin of Mr. Burns and his energy monopoly within the town. Through slanted drilling, he taps the oil before the school, which results on many catastrophic events that cripple the denizens of Springfield. Saddled with the cost of drilling, Skinner had to lay off Willie and new music instructor Tito Puente. A jettison of oil from Burns’ drill destroys Bart’s treehouse, injuring him and his dog. Fumes from the rig end up getting Moe’s, leaving Moe out of work and Barney out of booze. Underground drilling creates a fault line under the retirement home, bringing half the building into the ground. Not even the tireless sycophant Smithers can stand for this level of dastardly deeds, resulting in his termination. Burns completes his complete takeover of the town’s resources by blocking out the sun, keeping its citizens totally reliant on his power supply. It’s soon after that the most hated man in Springfield is shot by an unidentified assailant, leaving him to collapse on the town square.

Most of the citizens’ hatred of Burns comes through chain reactions of his rampant greed, self-serving nature and desire for unchecked power. And while his plan and execution of blocking out the sun might be a little silly (or as Smithers puts it, a cross over into cartoonish supervillainy), it works perfectly as the proverbial last straw; with no natural light, Burns is completely at the town’s mercy. The two seeming front runners for the gunman are the two with personal grudges toward Burns. First, Smithers, whose thankless tasks and toadying toward Burns are emphasized even further until he is quickly fired after daring to finally say no regarding the sun scheme. Second is Homer, who falls into a ludicrous state because Burns continuously doesn’t remember his name. It’s sort of the last hurrah for this long running joke, being pushed way over the top until Homer just loses it. The climax at the town hall meeting is one of the greatest scenes in the entire series; the town is so impassioned in their unified hatred, while Burns just eats it up, loving every minute of it (as he wonderfully puts it, foreshadowing the ending, “You all talk big, but who here has the guts to stop me?”) I knew the conclusion before I watched the first part, but I really wish I didn’t. There’s so many hints and clues to extrapolate from, most damning being Burns’ missing revolver, that it would have been neat to be a part of unraveling this mystery. Of course the big reveal is something no one ever suspected, but more on that later.

Season 6 Final Thoughts
After a relatively insane season 5, I feel like things sort of leveled out and got a bit more grounded here in season 6. There were some insane bits, sure, but we got a fair share of episodes that were very down-to-earth stories, in their actual plots and just the way they flowed very leisurely (“Bart’s Girlfriend,” “Lisa’s Rival,” “Lisa on Ice,” etc.) Even episodes that were pretty out there like “Homie the Clown” still focused on the characters and felt very genuine. I guess largely this was a very character driven season; Homer’s relationship with his father, we delve in Marge’s troubled past, Bart and Lisa go mad in their own ways without school, and a look into the future at Lisa’s first love. Even without the change of show runners yet, it feels like one season segues into the next; Bill Oakley and Josh Weinstein’s seasons are noted as being more emotional, and this feels like a balance between Mirkin’s insanity and the more level-headed stuff of season 7. Still, great, great, great, great stuff. Great.

The Worst
“Another Simpsons Clip Show” by default, but as a clip show, I barely count it.